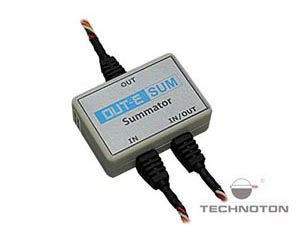 DUT-E SUM summator enables to obtain data of the total fuel volume from several tanks of a vehicle or from fixed tanks when used in vehicle tracking system / fuel monitoring system (FMS).
Precise amount of fuel in each tank is measured with DUT-E 232 or DUT-E AF fuel level sensors.

To solve the issue of fuel consumption control in a vehicle with two fuel tanks, you need to install two DUT-E 232 or two DUT-E AF fuel level sensors and one summator. The vehicles tracker  receives data of the total amount of fuel (in liters).

If the number of fuel tanks is three or more, cascade scheme of connection is employed: