Fuel transportation in truck tankers is connected to several risks – not just safety-related, but also economic and, as it turned out, reputational.

One of our customers, an oil-refining company with own fleet of truck tankers, faced a problem of fuel theft from trucks’ cisterns: illegal fuel draining, replacement of fuel with cheaper liquids, diluting fuel by adding extraneous liquids to fuel in the tank. The problem caused direct money losses, raised insurance costs and damaged fleet’s reputation.

To fight fuel theft, our partner Starcom Systems proposed the fleet to deploy a fuel monitoring system based on DUT-E 2Bio differential fuel level sensors. Having a possibility to measure fuel volume 24/7, the fleet was able to reduce insurance costs and avoid fuel draining from cisterns.

Let’s go step by step through the project and see how it was solved. 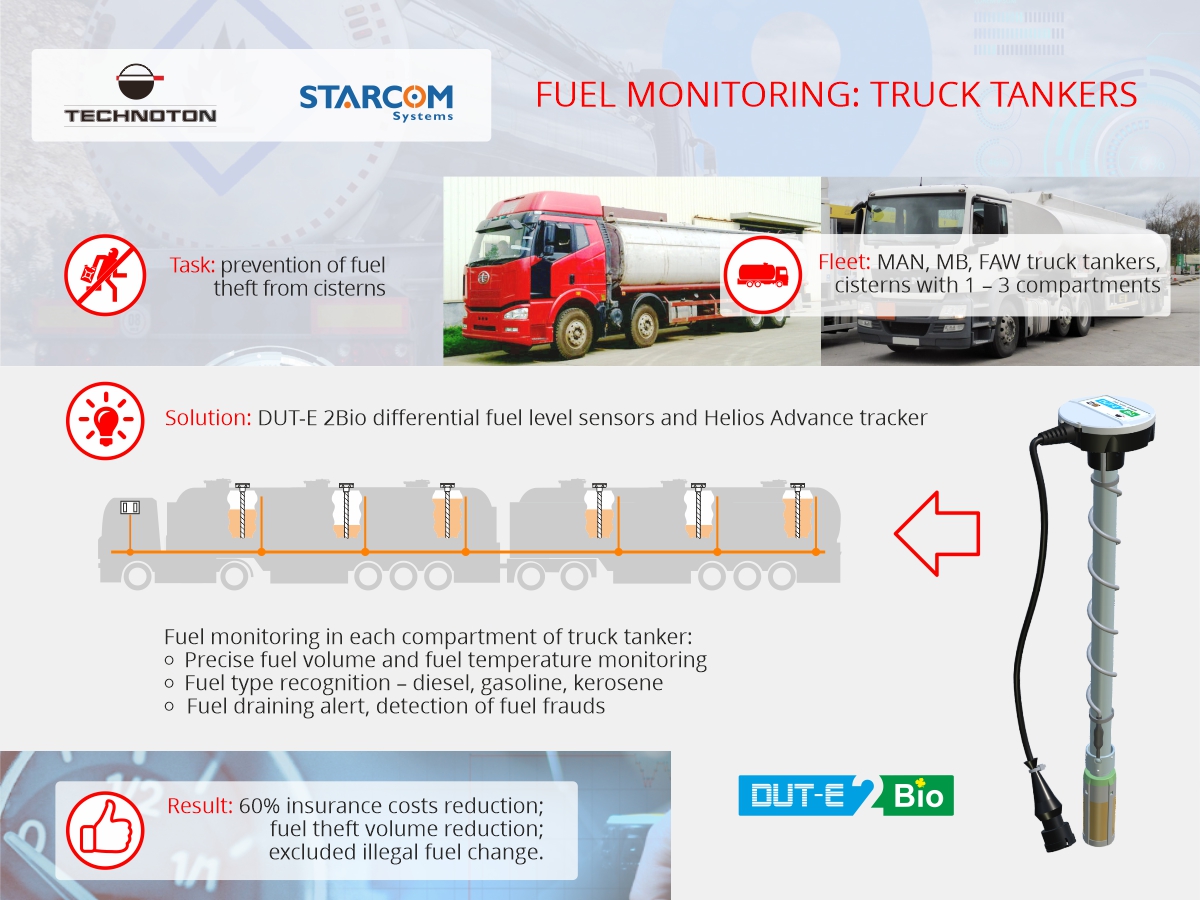 For over 1000 truck tankers belong to a company from North Africa, which refines oil to fuels and delivers products to gas stations and storage units of road construction companies. Fuel transportation is carried out over long distances: from 100 to 1000 km.

The fleet has truck tankers of various makes and models, which are different in fuel cistern shape and number of compartments. Furthermore, the same truck transports different fuel types (diesel, gasoline, kerosene) depending on the day.

Three main tasks to be solved

Taking into account fleet type and composition, the following tasks of fuel monitoring system were identified:

2. Ability to measure different types of fuel
Different fuel types have different permittivity coefficient values. To avoid the influence of permittivity, fuel monitoring system should be able to recognize fuel type in each compartment.

Why DUT-E 2Bio – main advantages for the project 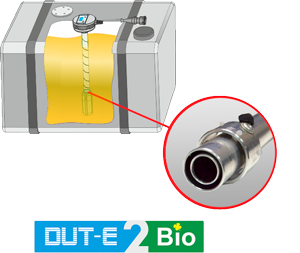 Due to the third measuring electrode DUT-E 2Bio detects fuel types by predefined pattern, measures fuel level and volume in each compartment of a cistern. That means, there is no need to re-calibrate sensors, make changes to fuel tank table and carry out additional adjustment of the telematics unit anymore. In case if fuel tank was filled with gasoline instead of diesel fuel, measurement inaccuracy won’t get higher than 1%.

In some cases, after draining fuel from truck tanker, a driver pours in some low-quality liquid, which contaminates and spoils fuel inside compartment of a cistern. Differential fuel level sensor detects fuel replacement.

Totally 2200 DUT-E 2 Bio fuel level sensors were installed to more than 1000 fuel trucks in each compartment of a cistern. All sensors were mounted over a short period since March 2019, so that carrier didn’t incur costs caused by vehicle idling.

The height of cisterns varied from 1500 to 2000 mm. Due to advantages of DUT-E 2Bio, adjustment of probe length with additional sections 500 and 1000 mm occurred in few minutes during sensor installation.

But the installation process was not simple: technicians had to work only at certain hours, when vehicles were out of working shift; calibration of large tanks and cisterns was carried out by fueling up 1000 litres of fuel; additional wires and cables, outlets and stretch cords were used when mounting telematics hardware.

Benefits of truck tankers telematics, based on DUT-E 2Bio and Helios tracker

1. Messages on fuel type/quality change are sent to the tracker, which notifies fleet manager of this Event via e-mail or SMS. The efforts of roguish drivers to steal or change fuel now won’t go unnoticed.

2. The number of compartments can reach six on truck tankers with trailers. That’s why DUT-E 2Bio fuel level sensors with CAN j1939/S6 interface, based on S6 Technology were used. All sensors together with Helios Advance tracker were united in a single network with power supply and configuration of hardware from one point. Each sensor got a unique address in a network. This provides an opportunity to see both the total volume of fuel in the fuel tanker and trailer and also level and volume of fuel in each compartment.

3. Due to the simplicity of a truck tanker fuel monitoring system, based on S6 Technology and Helios tracker with CAN interface, the total costs of the project was not high.

Effects of implementing a tanker truck monitoring system speak for themselves: